History of the Steamer

The "Yunnan pot" is back!

Le Steamer is not a new invention, confirming the saying that "old pots make the best soup". The design is in fact based on the "Yunnan pot" that has been used for centuries in the Yunnan province of China. Perhaps the fact that Yunnan cooking is not included in the eight large groups of Chinese regional cuisine explains that the techniques and recipes of that region are less well known in the West. The "Yunnan pot" is still used in Yunnan and elsewhere but is very hard to find in Europe and North America. It was at a craft fair in California in the late 70's that Laurent Merchant saw his first steamer. It is now becoming a speciality of the Dordogne!

Used for centuries to enhance flavour and promote health

In the town of Jianshui, during the reign of Emperor Qianlong of the Qing Dynasty, a potter by the name of Yang Li created a steam-pot with a hollow tube in the middle. This special design made possible the preparation of "qiguoji" or "steam-pot chicken" the now famous culinary speciality of Yunnan province. According to this method, pieces of chicken are placed in the steam pot along with mushrooms, water-chestnuts, scallions and seasoned with ginger and rice wine. Other ingredients may sometimes be added such as ginseng, medicinal herbs and even dried Himalayan caterpillars! Gradually a soup is formed by the condensation of the steam and the juices of all the ingredients. Renowned for its rich and subtle flavour and its curative properties, this soup, thanks to the clay steam-pot does not boil while cooking. See recipe for Qiguo ji

Secrets of flavor and health 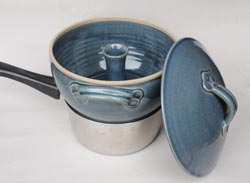 There are no holes in the bottom of the pot, that's precisely what's so special about this type of ceramic steam cooker: The juices are saved inside! A pure broth containing only the flavors and nutrients extracted by the steam, all of which are lost in a traditional steamer.
See the recipes.

Your pieces are packed individualy with great care. All orders are double boxed (packed one box inside another). Each piece is shipped seperately in most cases.
For multiple orders please contact us. for a shipping estimate.

Your order is shipped directly from our workshop in Dordogne, France via "La Poste - Colissimo". Delivery with signature.